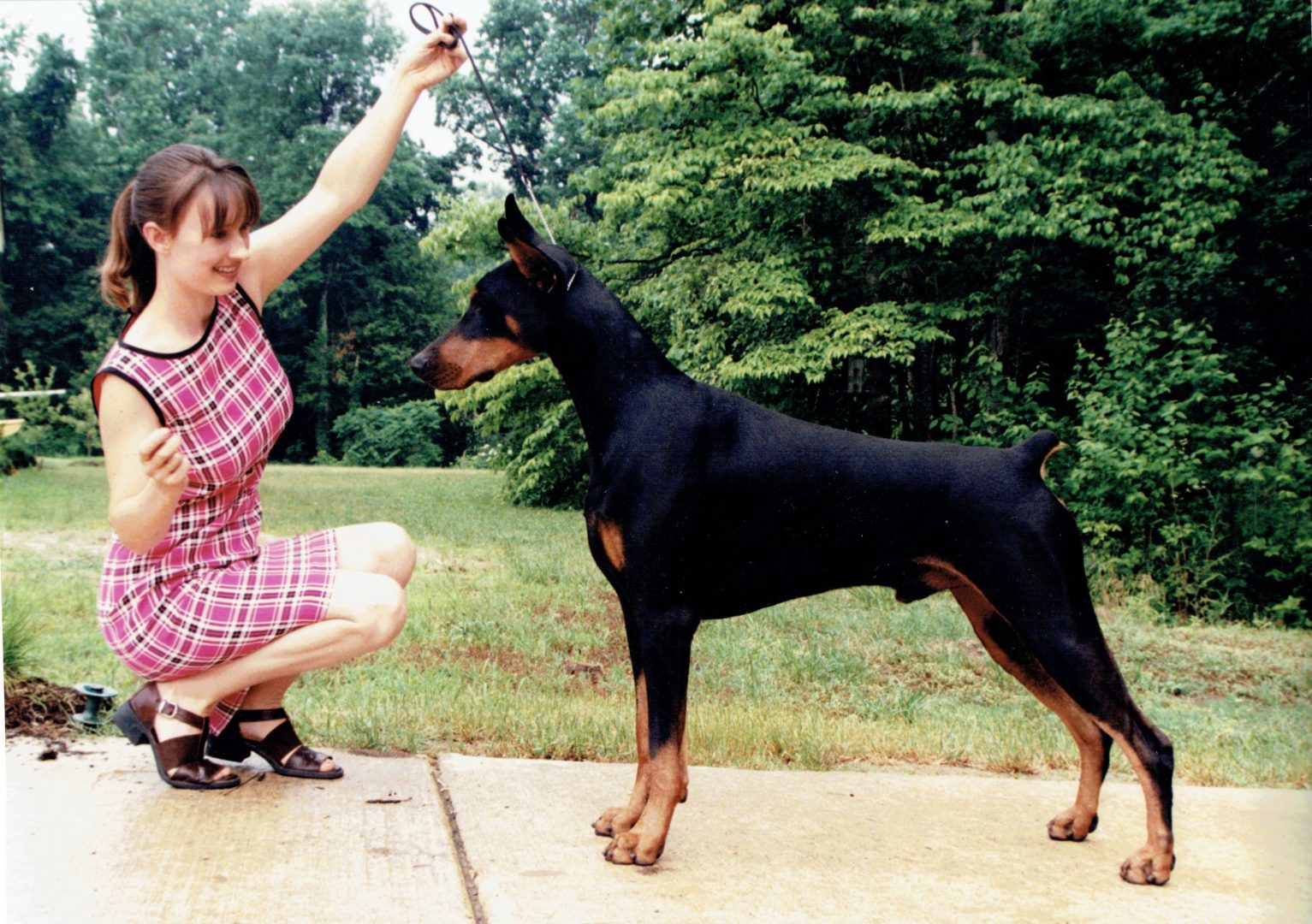 In 2002 I was approached by the Doberman Digest Magazine to do a profile on myself and the Perfex Kennel, the below is what was published in the August 2002 edition.

My story begins in New Zealand when I was 13 years old, with a stray cat that turned up on my family's doorstep 20 years ago. He was a Persian in a terrible state with his coat totally matted to his skin and many sores underneath... he stunk too. After failing to find his owner we took him to the vet to be shaved and neutered; and later that day picked up a hilarious looking animal whose fluffy face, feet and tip of tail were the only parts not shaved. We named him Smokey, and when his coat came back after a year I started entering him at the local cat shows in the domestic section in classes for the fluffiest tail, biggest eyes etc. My Smokey became a bit of a curiosity to the breeders of the registered cats, because as we had learned, he was really quite an exceptional Persian. He was also a fairly unusual color in New Zealand at the time, as there were not many 'black smokes' around, especially good ones. A breeder contacted us and thought that perhaps Smokey was from her breeding and managed to get us registration papers for him. Smokey quickly became a top winning cat (in the neuter/spay division), a Best In Show winner, and usually in the top five at every show he was entered, he was now Grand Premier Parwin Smokey Joe!

Two years later, after having begged and pleaded for a Doberman puppy to show, my Mum finally gave in. For my fifteenth birthday we went to look at a litter that was out of an Australian import and a locally bred, pointed bitch. Tessa was pick of the litter... a very pet litter, and she had an awful temperament also, but I did not recognize her faults for some time, and in the mean while I had great fun learning to show her, doing obedience, agility and being involved with the Dominion Dobermann Club. It was here that I met Martyn Slade of Martyn Dobermanns, and Pat, John, and Sam Hedges of Parima Dobermanns.

Martyn especially was a wonderful teacher and good friend, and allowed me to study his old U.S. Dobe magazines from the 7O's and other literature. He also let me show some of his young dogs for me to gain more experience. It was while I was under Martyn's wing that I first met Jim White (Cambria) who was in New Zealand visiting Martyn.

It was now 1990 and I married Steffon (also from New Zealand) and moved to the United States. After moving to the U.S., I bought Kaliph (Shadai's Perfect Pantomime). He was a wonderful red boy out of one of the first Josh litters (Ch. Platinum's Back in Black X Ch. Rahdy's Channing v Deserae, (a sable litter sister)). Kaliph, who died just a couple of years ago (aged nearly nine years old), had an impeccable temperament, he was an awesome boy who was our baby before having kids of our own. I pointed him myself, and had a wonderful time because Kaliph loved to play 'show dog'. Although he had some excellent attributes, he was lacking in other areas, and really wasn't championship material conformation wise. He was never bred. I then started looking seriously for the bitch of my dreams, and was prepared to wait for her. I was looking for a bitch that came from a good producing bitch line. I again came in contact with Jim White, who at the time had just had a litter of puppies. He sent me two photos of 12 week pups (who were already sold). They were out of Cryptonite X BIS Ch. Cambria's Mauna Kea, 'Cricket'. They were gorgeous, and I knew then that I was at the right place. These two girls were to become multi BIS Ch. Cambria's Carman, (Top 20 winner) and Multi BIS Ch. Cambria's Mignon, they were two of six Champions in that litter! Jim had planned to repeat the breeding a year later, but just days before Cricket was to be bred. Cryptonite died, and the decision was made to breed to his son (Ch. Rahdy's Strike the Gold, CD, ROM) 'Frisco'. Enya (Ch. Cambria's O B In Gold) was the pick bitch from this litter and was a beautiful gal. I showed her myself winning most of her singles, and two BOBs and a group 4 from the classes. I then let Ann White take her for the majors and last two singles, and she finished very quickly winning a huge 5 point BOS over Top 20 and BIS bitches, and a large 4 point BOW.

I had studied the book by Patricia Craige Trotter, Born To Win, Breed To Succeed and still find it to be a treasure. I like to re-read parts which I have highlighted to remind me of certain guidelines and theories so that I might make a better decision on choosing a sire without adding the emotional factor that might otherwise cloud my better judgement.

I had several reasons for using Eddie (Ch. Cambria's Cactus Cash). Firstly, he was starting to make his mark as a sire, and had already been bred to Enya's red litter sister, Ch. Cambia's Go For the Gold, and had produced nicely. I felt comfortable that this was probably going to be a good, safe 'click' and it certainly didn't hurt either that the blended pedigree of Enya and Eddie was just gorgeous... a textbook 'patterned pedigree'. Both of their sires (Ch. Rahdy's Sail the Seven Seas and Ch. Rahdys Strike the Gold CD ROM), are beautiful littermates from a top winning and producing sire and dam (Kafka and Sable). Enya and Eddie's dams are beautiful half sisters out of Betta (Ch. Florowills Bit of Magic) Top Producing dam to date. This combination would give me a tremendous direct tail male and tail female line! certainly a good foundation to continue on with if the resulting progeny were to turn out like I'd hoped.

PERFEX CAT O NINE TAILS CD ROM, 'Oscar' was my first to finish. I put several points on him including two BOB'S over a special from the classes. Ann White finished him in about four weeks winning three majors on the large Florida and Houston circuits. I was fortunate to find a wonderful friend through Oscar, shTwistere is Karen Fuss, who bred to Oscar with her Chilli (Ch, Gemstones Wildfire and Ice, UDX, ROM) and had Oscar's first litter (actually "Lit") because Solo was the only surviving puppy, and at 12 months, 1 day became Ch. Wildfires So So Good. It was Karens' talented hands that gave Oscar his CD ROM, of which I am so very proud, thank you Karen.

PERFEX TOBASC O CAT, 'Ally' was the next to finish a few months later, she too had many admirers, one of which was Jeanenne Thompson, who invited us to try out Ally as her next special when Lexi retired. She and Ally became a wonderful team and in 7 months of shows made Top 20 status this year, with a BIS and four BISS along the way — I am enormously proud and give credit to Jeanenne for a terrific year. Thank you Jeanenne for making dreams come true. I am hoping that Ally will produce as well as her pedigree suggests and that she will continue on as another outstanding brood matron in her strong tail female line.

CH PERFEX TOP CAT O BLUFF B CITY, WAC, Chelsea is owned by Mark Workman and plans to be the second ROM in this litter as she will be going to visit Aunty Karen for her CD in July. Chelsea is a multi BOB winner with two group 3's from the classes, she is also a Specialty BIS winner too!

CH PERFEX CAT'S MEOW O ENYA, Benson is a gorgeous boy owned by Laura and Brian Cox. Like his three siblings, Benson is also a BOB winner from the classes beating five specials (two were BIS, Top 20 dogs) under Frank Grover. Even though Benson is at the small end of the standard, at 27" he is an outstanding boy with excellent breed type, and he was awarded his majors and several reserve majors by noted breeder/judges.

I would like to thank Michelle at the Doberman Digest for the invitation to profile me, I am thrilled to have been able to share my story with you, even if it is just the beginning...

Thanks also to my husband Steffon for your support and encouragement, and to all of my friends, both new and old for your friendship